The result? An avalanche of online purchases that is burying parcel delivery trucks and postal carriers.

UPS, which normally operates one daily round-trip from Albany International Airport, upped that to two round-trips by early November, then doubled it again.

This week, UPS began operating four round-trips from Albany most weekdays. Each of the Boeing 757s can carry up to 88,000 pounds, or 44 tons, of cargo.

“It’s an indication of the online shopping that’s going on nationally and in the Capital Region,” observed airport spokesman Doug Myers.

UPS has also altered some of its package pickups to match demand with its capacity, UPS spokesman Jim Mayer told the Times Union, after The Wall Street Journal reported that drivers had been instructed not to pick up some packages from its largest customers following Cyber Monday promotions.

At least 100,000 small businesses have had to close permanently in the last nine months, according to data gathered by Yelp. Millions more have dealt with temporary closures and major losses in revenue.

Now, many remaining small businesses are reliant on a strong holiday shopping season, and there’s finally some good news for these business owners and their employees.

For example, at the Boston area small business called Boing Toy Shop, owner Kim Mitchell has been working overtime for the pasting nine months. She has had drastically change her business model.

“In certain ways, I feel like although I am in the same physical footprint, I am almost running a completely different business,” said Mitchell.

Since the start of the pandemic, Mitchell has had to shift more than half of her business online and added curbside pickup to keep her toy shop out of the red.

“In certain ways, I

New claims for unemployment benefits dropped for the first time in three weeks, the government reported Thursday, but the economy remains under pressure as Covid-19 cases surge and fresh restrictions on businesses loom in some states.

The Thanksgiving holiday is likely to have delayed the filing of claims, and economists warn there will be more job losses ahead if the pandemic worsens.

“People don’t apply as much when there are holidays,” Ms. Swonk added. “There

MONTZREAL — The Quebec government is cancelling its plan to allow gatherings over four days of the Christmas holidays.

Premier Francois Legault announced Thursday that the province will no longer permit multi-household gatherings of up to 10 people from Dec. 24 through Dec. 27 as had been planned.

Legault first announced the Christmas plan on Nov. 19, saying people could get together as long as they quarantined for a week before and a week after the holiday period. But coronavirus infections, COVID-19 hospitalizations and deaths are on the rise and the province’s health system is deemed fragile due to a lack of staffing.

Legault says it’s not realistic to think the numbers will go down sufficiently by Christmas.

Saturday was “Small Business Saturday,” but small businesses should always be front-of-mind these days. Now more than ever, local shops and entrepreneurs deserve our support. But that’s pretty easy when what they’re making is this cool.

Packages of stationery from Appointed arrive fastened with tape inscribed with the words “Beautiful Tools to Inspire Beautiful Work.” That’s graphic designer Suann Song’s mantra. After having a hard time finding “minimalist, super-functional, well-designed American-made paper products,” she decided to make them herself, launching Appointed in 2015. All the materials are purposefully selected (such as the U.S.-manufactured, water-resistant book cloth covers), and then almost everything is assembled in Appointed’s Ivy City warehouse. The signature product is Appointed’s monogrammable spiral-bound notebook ($24). But lately, Song’s having trouble keeping up with demand for planners, which went up more than fivefold

SAN FRANCISCO, Dec. 3, 2020 /PRNewswire/ — The global pandemic is continuing to reshape the retail sector, fueling $189B* in anticipated online holiday sales and forcing brands to wage a virtual battle for customer loyalty. Retailers that enter 2021 with a tailwind will be those that elevate their customer service, according to a survey of 750 consumers conducted in October 2020 by Simplr, in which 90 percent of consumers who shop online said exceptional customer service is important when choosing where to shop. That loyalty translates into revenue, as six in 10 consumers said they will give a retailer more business if it provides exceptional customer service.

Retailers cannot risk an online letdown, given that consumers surveyed estimate a 60 percent increase in their online holiday shopping from last year.

“If CX leaders think they’re ready for the digital stampede, they should know that more than half of consumers

The figures offer the latest evidence that shoppers during the pandemic have focused their spending on home-related activities and items while further shifting their buying online as they stay away from physical stores.

“The consumer is holding up reasonably well,” said Steve Sadove, senior advisor for Mastercard and former CEO and chairman of Saks Inc.

The report measures spending across all payment types including checks and cash. It covered the period from Nov. 1 through Monday and excluded sales of vehicles and gasoline.

The spending pace in November was better than the 2.4% growth forecast for the overall holiday season, which runs from Oct. 11 to Dec. 24 and could be impacted in the final weeks before Christmas by surging coronavirus cases and the possibility of stores facing more restrictions.

Furniture and home furnishings jumped 16.3% in November, while electronics and appliances saw an 8.2% increase, according to Mastercard SpendingPulse.

The downtown resident, who co-owns Coffee & Talk on Sixth Avenue, described the once bustling business area where workers filled high-rises before the pandemic as a haunted ghost town now. His coffee shop is nearly empty at lunchtime these days, he said.

But some holiday decorations recently installed along downtown streets are bringing a little life back to the area, he said.

“It’s something positive that brings joy to the neighborhood,” Kittani said.

Employees with the Downtown San Diego Partnership, a nonprofit that represents nearly 400 businesses in the area, spent this week wrapping garlands and twinkling lights around light posts and planting fresh poinsettias in planters throughout downtown.

The organization decorates downtown business streets every year, but this year it partnered with other neighborhood groups to expand the holiday décor to residential areas.

There are 23 days left until Christmas and while Black Friday and Cyber Monday have passed, that doesn’t mean online shopping is over.

Both the Better Business Bureau and Federal Trade Commission are telling consumers to be wary with online shopping this holiday season.

“Ads for great online deals are everywhere, tempting consumers with great prices and free shipping offers,” the Better Business Bureau said. “Sometimes consumers find what they ordered is not what they get. Many ads pop up with enticing gadgets, cute merchandise or items with a subliminal ‘I gotta have it’ messages, making it irresistible to click and check it out.”

TORONTO, Dec. 2, 2020 /CNW/ – Small business owners are feeling the pandemic burnout, with close to half reporting they have suffered from mental health issues as a result of COVID-19, and 43 per cent saying they have worked significantly more hours, according to the latest survey results by the Canadian Federation of Independent Business (CFIB). 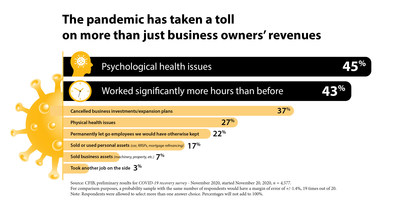 “Many Canadians are struggling with stress right now, and small business owners are no exception. Many of them rely on this time of year to stay afloat, but most are nowhere near their usual sales levels at a really critical time for their survival,” said Laura Jones, CFIB’s executive vice-president.

Unfortunately, the start of the holiday shopping season has been weak for small businesses. The latest results on CFIB’s Small Business Recovery Dashboard show that: